Welcome on my blog! Today, we are going to go on with the differences of the most common 3D printing materials, the ABS and PLA plastics. The most desktop 3D printers can work with these materials, last week’s post was about the main characteristics of the two filament types, today it’s going to be about some special aspects of use in practice. I want to discuss some important things about these 2 materials, I mean the shrinkage factor, rigidity, bio-degradability and heat resistance.

A fact is a fact: PLA is a much more rigid material compared to ABS. If you compare ABS and PLA by applying a progressive force, ABS will start to bend and finally will break; while ABS is bending, PLA on the other hand will hold it’s shape (it’s very rigid and doesn’t flex). Actually, this one is the reason for the design fail of the plunger construction of the MakerBot Replicator 2. The guys at MakerBot have set the old plunger construction used in the Replicator1 and other RepRap 3d printers. But those all work with ABS filament, which is . as mentioned above – not as rigid as PLA. After 100 hrs of 3D printing with my new Replicator2 desktop 3D printer, the filament has cut a hole in the plastic cap of the plunger. It’s okay – I thought – and I have tightened the screw on the plunger a little. I got another 100 hrs of 3D printing, but after that, another hole has appeared. There is a much better – a spring loaded – construction for that, you can download the upgraded plunger form Thingiverse and 3D print your own.

PLA is more rigid and its surface is harder as well. When applying more force, after a certain point it will eventually break before bending. You often need more force to break a PLA part than an ABS one especially if you have a thick part.

Something about the shrinkage factor of PLA for 3D printing

Fact: PLA has a much lower shrinkage factor than ABS. Usually it means that it is MUCH easier to use in the most common desktop FDM 3D printers: unlike ABS, PLA deforms definitely less and suffers from very little layer detachment leading to a much higher success rate on your 3D prints. I’ve 3D printed my most beautiful parts all with PLA, ABS isn’t the right choice for fine surface finishes.

With ABS, even a relatively small part will deform when printing if you don’t have a heated bed and/or a heated building environment. With the RepRap machines like the Felix or the Prusa model, it is really hard to get a tempered 3D print environment, because the working area of the 3D printer isn’t closed. (I’ve never managed it to heat it up to 100 Celsius as suggested, my maximum of bed temperature has been 80 Celsius with my RepRap.) With the more expensive desktop 3D printers like the MakerBot Replicator 2X it would be better: the tempered chamber of the 3D printer allows you to control the temperature of your prints immediately.

Are you interested in painting of your 3D printed plastic parts? I have really good news for you: both usual 3D printing materials – PLA and ABS – can be painted and post processed (sanded) if needed. First thing is first… Preparation. There are some Items that you need when prepping the plastics to paint. This first step is really important, because if you missed it, the primer didn’t bond well with the ABS plastic and tended to flake off. 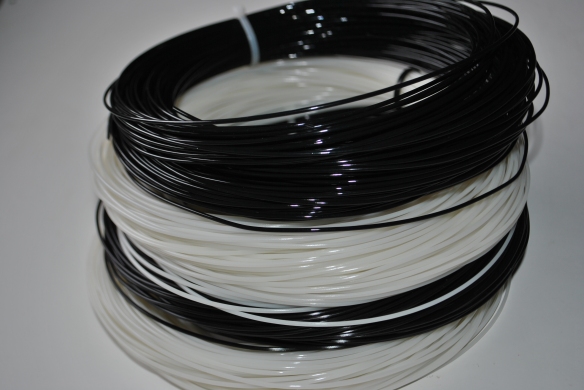 PLA is a bio degradable material. This means it will resist for very long in indoors use and occasional outdoors use but permanent exposure to the elements will eventually start to degrade it. It is not suitable, for example, for parts that need to stay outdoors 365 days a year; for these applications ABS is preferable.From what we’ve seen over the years we’ve been selling 3D printers there are 3 very specific cases where ABS is preferable over PLA:

I’ve had a customer a couple of weeks ago who has asked me to 3D print build enclosures for electronics modules that were going to be left outside for many years. In that case ABS was the better choice because it’s not biodegradable, so it is more durable for outdoor use.

Another customer needed to build supports for DIN rails. The support needed to flex enough to fit into the DIN rail. I have 3D printed the same part in PLA and ABS. PLA, caused by its rigidity, wouldn’t flex so ABS was the right material because of its flexibility. In the last couple of weeks, some flexible PLA materials have appeared on the market as well; I’ve already ordered some spools for testing but I haven’t got any experiences with them yet. I’m looking forward to see the results.

Fact: ABS has a higher melting temperature so if you need plastic parts that need to deal with high temperatures (about 100 Celsius or more), than ABS is also preferable over PLA because of its higher melting point.

My conclusion: all in all PLA is not a “one size fits all” but it will meet the needs of 95% of the 3D printing enthusiasts and – from experience – it is so much easier to 3D print compared to ABS.

That’s it for today, I hope this posts helps clear out some questions about the right choice of material for 3D printing. In my next post, I’m going to write about some really special, experimental materials which can be 3D printed as well, just think about some wood or sandstone 3D printed things. It sounds awesome, doesn’t it?

15 thoughts on “3D printing plastics – PLA vs ABS in practice”